First Time For Everything #1: A Traditional Korean Wedding

Since I’ve been failing at blogging lately, I’ve decided to start a new series of “Firsts” posted once a week, every week (well, we’ll see how well that goes), in obvious tribute to the name of this blog. Week #1:

Most weddings in Korea have been Westernized so I was lucky to have been able to go to a traditional Korean wedding. I arrived at the temple in Ulsan’s Old Downtown (성남동) and was greeted by hundreds of Koreans dressed in a range of outfits from shorts and flip flops, to expensive suits, to traditional Korean “Hanboks” (worn by the bride, groom, and their families).

The ceremony commenced while the large, standing audience chatted away noisily, snapped hundreds of pictures on their outlandishly-large smart phones, and came and went as they pleased. The bride was brought down the aisle in a decorative box-like contraption, carried by 4 young men dressed in all white and hats that looked like a cross between a rice hat and a sombrero. 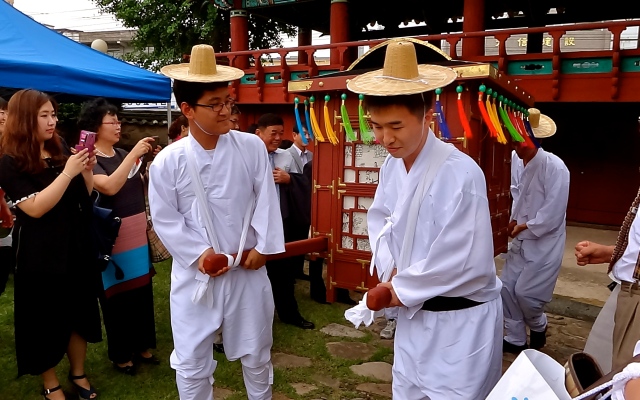 The groom, my friend Howard, had no idea what he was doing (as he informed us afterwards) and obeyed whatever orders he was given, such as eating a certain dish or carrying his new bride around a table 3 times. Afterwards, we went to a nearby restaurant to eat with the newlyweds and see them off to their honeymoon in Bali. 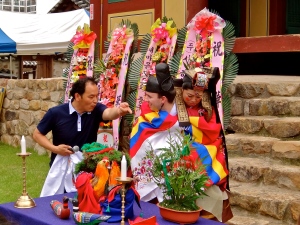 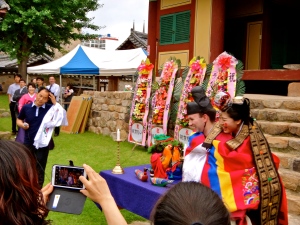 I’ve been to a couple more weddings in Korea since and they are more or less the same – or at least it just seems the same since most of the ceremonies are done in Korean and I wouldn’t be able to tell the difference regardless. Most weddings don’t have the bride being carried down in a box – which, personally, would be the main tradition I would demand if I were Korean – but they often change into Hanboks after wearing a white, poofy wedding dress at the ceremony. The ceremony is very much a spectacle with the photographers rearranging the bride’s dress and hair every other minute, so as to get the perfect shot, and people excitedly chatting away as if they were watching Shamu at Sea World.

Wedding pictures are taken before the actual wedding, so a photo shoot of the groom and bride dressed in multiple wedding dresses can be displayed at the actual wedding. A standard wedding gift is around 25,000-50,000 won per person attending so the newlyweds usually end up with a decent chunk of change.

The best – and possibly the worst – part about Korean weddings is the entertainment. The 13-year-old-singing-and-dancing-to-K-pop form of entertainment. I’m not sure why this is a tradition or if it even is at all, but I’ve seen far too many teenage girls dressed in their school uniforms doing body rolls and shaking their hips to “Girls Generation”, “Sistar” or “Wonder Girls” in the middle of a wedding ceremony right before vows are exchanged. I don’t – I can’t – I just…. why?!

(Thanks for taking this video, Meg!) At the most recent [westernized] Korean wedding I attended.

I wish I had more thoughtful and cultural things to say about Korean weddings. Unfortunately, I haven’t quit my habit to pregame a little too hard before any and most events, so I don’t actually remember all that much else. Plus, it was a few months ago as well.

← To Have a Facebook Page for Your Blog or Not?
Blog or P*rn Site? →