Climbing Mt. Fuji in One Day on a Budget

Climbing Mt. Fuji was kind of like the drunkest night of my life. While alcohol wasn’t actually involved, the horrible drunk symptoms absolutely were: stumbling, slurring of words, light-headedness, nausea, delirium, the inability to form coherent sentences, and a strong desire to curl up on a large rock and pass out every 30 steps.

The boyfriend and I planned a trip to Tokyo a few weeks back and then decided a few days before departing that we absolutely had to climb Mt. Fuji. And thus the research began.

Mount Fuji – or “Fuji-san” – is Japan’s most sacred and highest mountain standing at 3,776 meters. It was recently added to the World Heritage List in June 2013 and has around 100,000 climbers a year. It is still an active volcano today and last erupted in 1701. 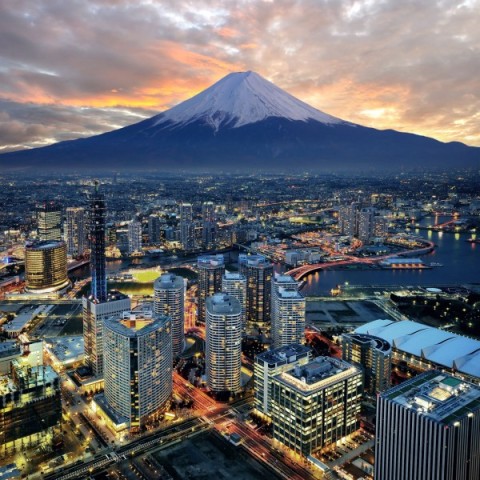 I was somewhat discouraged when reading about this climb because most people recommended climbing a few hours one day, staying the night at one of the huts on the mountain, and then getting up super early to catch the sunrise the next morning. But ain’t nobody got time for that.

After doing some more research, I found a few blogs and articles about “bullet climbers” starting the hike late (8-10pm) and climbing through the night. Along with saving loads of time, you also avoid the 7000 yen($70ish)/night accommodation costs on the mountain. Win-win!

Small huts you can sleep in – on the floor, of course.

So after some site-seeing and a short nap that day in Tokyo, Nate and I headed to Shinjuku where our bus would leave for Fuji’s Kawaguchiko 5th Station (scroll down for details & tips). A 2 hour bus ride brought us to the Yoshida Trail at around 930pm where we would start our ascent.

The hike started as any drunken night might – all lollipops and rainbows, adrenaline running high, and absolutely no idea how horrible the next few hours might be. We started at Station 5 and our goal was Station 10: the summit. There are a few huts (Station 6-9 plus a few more in between) on the way up to rest, get food and spend ridiculous amounts of money to use the Little Girl’s Room (200¥ –AKA $2– every time, to be exact). 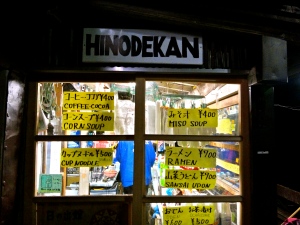 The climb from Station 5 to 6 was a breeze – the part where I convinced myself that all of those people who wrote reviews warning against “bullet climbing” just couldn’t hang.

6 to 7 was alright – a bit tiring and definitely more steep, but alright for the most part. From 7 to 8 was when we started getting down to business. We were climbing up large boulders on all fours and having to take breaks more frequently.

From 8 to 9 was when it really started to hit me. The cold was setting in and the wind was becoming more fierce. The hike was no longer a peaceful climb in the night above the thick fog and under the billions of silent stars. It was becoming a literal pain in my ass.

I was struggling. I was feeling nauseas and light-headed. I had to stop even more frequently to rest and gain some strength to keep going. I wanted to go back down to Station 6 where I could sit happily on a rock, eat a roast beef sandwich and point out different constellations in the dead silence of night.  Luckily, I had an awesome and motivating boyfriend (who clearly wasn’t being affected by the altitude at all) to encourage me.

Climbing from Station 9-10 was considerably easier, or maybe I was just running off adrenaline from being so close to the top. Hundreds of climbers were congested in the small pathways now and we spent the majority of our time waiting in queues. The sky started lightening and people were starting to push and shove their way to the top. I read that there are about 3000 people a day that climb Mt. Fuji during “climbing season” (July & August) and everyone is trying to get there at the same exact time: sunrise.

After a grueling 7 hours, we finally made it to the very top, just in time to see the sun rising.

After being greeted by 2 lion statues, a couple shrines and wooden posts that mark the top, there were various shops and huts selling ramen, burning stamps onto peoples’ walking sticks (you can buy a wooden walking stick at the bottom and purchase stamps to get burned into it at every station) and selling other random souvenirs. We sat at the top for about an hour and enjoyed the spectacular view before making the brutal descent. 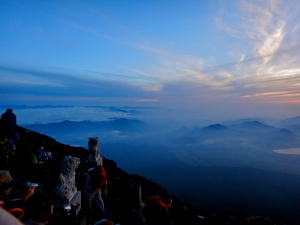 The climb down was possibly even more exhausting. We were sleep-deprived and delirious and the last thing we wanted to do after climbing to the top of a 12,395 foot mountain was crawl back down, but we slid down the loose, volcanic rock-filled pathway in about 4 hours.

100% absolutely worth the climb. It was more of a mental struggle during most of the ascent – I literally was saying “mind over matter” in my head for an hour straight – but it feels amazingly rewarding when you reach the summit (and even better when you make it all the way back down!)

Tips on Climbing Fuji in One Day on a Budget:

1. Research! Read about other people’s accounts to see if you’re up for the challenge. Granted, it’s not something you need to train for months in advance if you’re in relatively good shape, but it still is a challenge.

2. Decide which trail you want to go up. Because we were on a time crunch (& also somewhat out of shape), we chose the Yoshida Trail starting at Kawaguchiko Station 5. This is the most common (therefore, the most crowded) trail. It’s the easiest to climb and the easiest to access.

3. Figure out how you’re going to get to the starting point. Most people start at Station 5. However, there are about 5 different “Station 5’s” (again, we started at Kawaguchiko). There are many different trains/buses/subways you can take to get here that vary in price, speed and convenience. We chose to take a bus from Shinjuku Station in Tokyo to Kawaguchiko Station 5 because it’s one of the few that is direct (there are buses/trains that bring you just to Kawaguchiko, which is NOT where the Yoshida Trail begins – You have to go to Kawaguchiko Station 5).

On the map above, I believe the bus brings you to Subaru Line 5th Station. It took about 2-2.5 hours from Shinjuku Station and only stopped a few times on the way to Kawaguchiko Station 5. Click here for the website. For this particular bus, reservations are required and they book up fast during climbing season (we booked ours about 3 days in advance and got the last seats). You can call and someone will speak enough English to reserve your spot or you can reserve it online (although, I had some difficulties and ended up just calling). We chose the latest departure time (730pm), so we could start the hike around 10pm. It costs 2600¥ each way per person (booking a round trip is advisable so you can ensure a spot on the bus back – although this also means you have to make it down by a certain time. We scheduled our return at 1030am and made it back with plenty of time to spare). Click here for other public transportation options and timetables.

4.  Check the weather & sunrise time beforehand. If it’s going to rain, you might want to pack differently. You will also want to time your hike so you can get to the top before sunrise. At around Station 7 and 8 is where most people stay in huts overnight so it starts to get super crowded.

5. Rest before and give yourself plenty of time to get to the bus station to depart. We didn’t take nearly as long of a nap as I would’ve liked, but a cat nap is better than nothing. We also thought the bus terminal would be easy to find, but Shinjuku station is HUGE. It’s actually down the street a little ways from the main station.  Below is a map somebody gave us – the bus terminal you’re looking for is Shinjuku Kosuku Bus Terminal on the lower left with a [sloppy] box around it.

6. Pack light and smart. It’s around 90 degrees in Tokyo during the summer so you probably won’t want to wear your hiking gear on the way to Shinjuku Station. However, you still want to pack light so you aren’t lugging up an extra 30 pounds. (Scroll all the way down  for a list of what I packed.) Remember that it is FREEZING on the mountain, regardless of how warm it is at sea level. A lot of people think that since it’s summer and there’s no snow, it’ll be warm on the mountain. It’s NOT.

7. Buy snacks beforehand. We made 3 roast beef sandwiches each that we packed for the climb + granola bars and bananas. You can buy food at the huts/stations but it’s pricey and costs more the higher you climb.

8. Bring a lot of coins. If you’re a girl, you’ll be using a lot of 100¥ coins to use the bathroom. Luckily, the bathrooms are pretty clean (probably due to how expensive they are to use). Make sure you don’t leave your stuff in the bathroom either. 5/6 times I used a bathroom, somebody had left a purse or bag hanging on the hook. You climb down a different route so a detour back won’t be convenient.

9. Rest at each station. We rested at every station and in between as well. Like I mentioned before, I was starting to feel nauseas and didn’t want to get terrible altitude sickness so I took a lot of breaks to let my body acclimate. It’s not a race up the mountain. It’s actually even worse to climb up fast because then you’ll be waiting a few hours at the top for the sunrise (the climb up takes anywhere from 5-8 hours) and like I said before – it’s freeeezing at the top.

I spent A LOT of time looking for all the information I wrote about here on multiple sites and blogs. Hope that this can be of assistance to some of you out there!

← Is this what Hell feels like? – Beating the Heat in Korea
Corporal Punishment in Korean Schools →